You got to see all your available option when buying the best wireless video doorbell for your home.

And what’s best other than reading in-depth reviews and doing window shopping beforehand?

For that matter, we bring you this Zmodo Doorbell review which will tell you whether to buy this wireless video doorbell or not.

What features make this doorbell worth considering and what features are a big downside for it.

In the end, you will also get to know the best alternatives to Zmodo smart wifi doorbell.

So, without any further ado, let’s get started.

Zmodo smart doorbell comes in a simple neat packaging with all the requisites.

It is slightly curved sideways rather than being pointed at the edges.

Zmodo comes in bright shining colors which seem to enhance the home decor.

At first glance, this new version of Zmodo doorbell camera looks promising, but we will have to wait for few more minutes to pass the final judgment.

The camera, the PIR sensor, and the button have bulged out from the doorbell giving it a unique look and feel.

Welcome, to my favorite section of reviews.

As claimed, Zmodo doorbell is made to work seamlessly with the existing wiring of your home.

Also, one can connect Zmodo Greet doorbell to low voltage transformers. However, the necessary condition is that the transformers operating range must be in between 13 VAC – 36 VAC only.

You can employ Zmodo smart doorbell for viewing who’s at your door and for that matter, a smartphone with following specifications is required.

Zmodo Doorbell Setup is easy via the Beam. It’s simply more than just a WiFi range extender but also a smart home hub.

Beam has the capability to extend the range up to 200m (656ft) and 300Mbps, so that whole of your humble abode is covered.

iOS  7 and up, and if you are using Android 4.0 and up, then you are ready to go for using the Zmodo doorbell application which is readily available at the Apple and Google Play store respectively.

Moving on, you would also require a password-protected 2.4 GHz wifi network connection with WPA/WPA2 encryption.

The 155-degree angle of view lets you get hold of more area of your space.

The HD quality is up to 720p bound to deliver crystal clear video streaming.

To leverage Zmodo doorbell to the utmost, one can have it connected to various devices at the same time.

It also has a night vision and a capability to schedule notifications.

The batteries which come included in the package are lithium polymer batteries.

With a dimension of 3 x 2 x 5 inches, and weighing 0.75 pounds, this doorbell looks marvelous when talked of its specifications.

In few sections from now on, we will test it against few benchmarks about how it performs?

The black/silver color complements the gizmo and makes it look drop dead cool.

I liked it very much, and it may seem I being a little biased concerning the design.

The Zmodo doorbell has the Zmodo branding at the bottom which goes well with the design.

From the top, it has the camera, PIR motion sensor, and the IR blaster, everything vertically arranged.

Nothing seems to be overdone here, just great.

The bottom flat surface has the speakers. Concerning the build, the Zmodo greet is sturdy. The back part is where all the screws and the wiring will be employed.

It seems like, Zmodo has spent a considerable time planning the design and built of the doorbell. So far, so good.

Let’s see next, how the installation part goes. 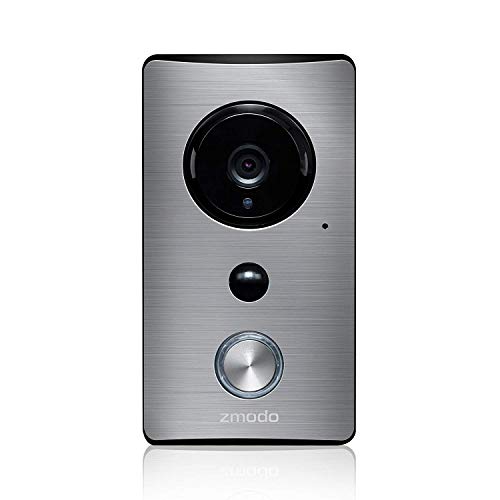 Here comes the first downside, the very first thing so far that doesn’t go well with most of us is that it requires wiring to be employed.

So, what we can draw is that if you are looking for a wireless video doorbell or battery powered doorbell for your property, then this is not the right thing for you.

However, we have covered the best wireless video doorbells for you. You can always read the review here.

Anyway, moving on to the installation part, this might not be easy for most of you. Though, it requires minimal efforts if you are an active home DIY’er.

The very first thing that you need to do is to move to the back portion of the doorbell.

Here you will have all the mounting screw holes and necessary stuff.

A little push from either side will remove the outer covering. The outer cover is what we require to get the wiring done.

The cover will have two brackets; the bottom one is where you need to feed in the wires.

Take a note that the white bar of the cover faces the bottom side.

Now, mark the holes and use the drill bit to drill the holes. After feeding in the wires, mount it at the door using the screws, then attach the wires and tighten the screws.

Once you are done with the wiring, you can now mount the cover to your door and then the later part of the doorbell.

Once the switch is on, you will notice that the bell sign on the push button goes green and here you have it done correctly.

Now, we are done with the first part of the installation. Now, here comes the next part which is configuring the doorbell to the app.

So, the first thing that you need is to install the application on whichever smartphone device you are using. Make sure; your device meets the necessary requirements.

The later part is self-inquisitive, or you can consult the following video for entire doorbell installation and configuration.


So, this is how Zmodo Greet doorbell installation is done.

Concerning the video quality, it’s certainly not the best, but when compared to other video doorbells in this price range, it gives you strong reasons in its favor.

The application somehow might seem clumsy to some, and proper documentation is needed from the side of Zmodo doorbell manufacturers.

Also, the motion sensors are a bit downside as one has no way to limit the area or zone in effect. May give so many false alerts.

A video clip is recorded for later use whenever motion is detected which can be accessed on-demand.

Additionally, the Zmodo Doorbell cannot be used with Zmodo NVR.

The strongest contender in this list is Ring doorbell. Likewise, Zmodo greet wifi video doorbell, Ring video doorbell is wired, but it has 1080p HD quality. For the comparison between the two, click here.

The runner-up on this list is Skybell video doorbell. The main advantage of Skybell is that one can customize the video quality from 420p to 1080p. It also has customizable motion zones which indeed overcomes most of the downsides of Zmodo doorbell.

You can also give a check on August Doorbell Cam for the same reasons.

Another doorbell from Zmodo – Zmodo Greet HD which is also a great alternative for the doorbell.

Other Zmodo products to have a look on:

Zmodo has been in the sphere since long and earned its fame for strong reasons.

Zmodo Wireless Doorbell is decent performing video doorbell with excellent design, and the thing that goes well for Zmodo doorbell is being it’s on the lower edge of price range as compared to other wireless video doorbells.

And for that matter, it is a bang for buck product.

So, go for it if you are tight on budget and still want a video doorbell.

This doorbell looks great on paper but doesn’t perform well as compared to competitors like Ring pro, Skybell and others. Though, considering the price range, this doorbell is good to go.

This site uses Akismet to reduce spam. Learn how your comment data is processed.